The Theatre Royal is Glasgow’s oldest theatre still in operation. After its opening in 1867 it played host to countless pantomimes, plays, variety acts, ballets and operas before being reinvented as STV’s first television studio in Scotland. As television boomed, STV outgrew the Theatre Royal and in 1974 Scottish Opera purchased the building and began the task of converting the theatre back to its intended purpose. Careful restoration saw renowned theatre architect Charles Phipps’ original designs re-emerge and Scotland’s first opera house opened to the public on 15 October 1975.

In 2012, Scottish Opera began a multi-million pound transformation of the Theatre Royal, improving the audience and visitor experience. In addition to the building works, Scottish Opera wanted to celebrate the history of the theatre, securing funding from the Heritage Lottery Fund for a range of public engagement activities.

The Theatre Royal Heritage Project has delivered a range of programmes such as an Oral History Research Project capturing the memories of people who have links to the theatre and a Community Choir bringing together members who meet regularly and perform at a variety of events. Pop Up Theatre Royal was a programme for schools and community groups across Glasgow, for which an old trailer was converted into a mobile theatre space, allowing school children and locals to enjoy learning about the history of the Theatre Royal through fun and creative performances. We have also created a permanent heritage display as well as a temporary exhibition space, that will allow members of the public to learn more about the performance history of the theatre.

As part of the Theatre Royal Oral History Project, our team of Oral History Assistants interviewed those with memories of the Theatre Royal Glasgow when it was home to STV. Participants ranged from presenters to producers; audience members in the studio to those watching at home; all sharing their stories of the STV years. Visit our website to listen to their memories. 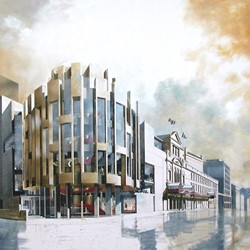